The Fellowship of His Suffering 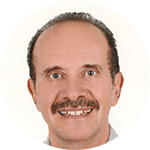 Since 1990, Ramez has been the General Secretary of the Bible Society of Egypt. He was born in Cairo, Egypt and emigrated to Canada when he was sixteen, returning with his wife and two children eighteen years after he had left. He spent many years as a staff member with the International Fellowship of Evangelical Students (IFES), became one of the Deputy Chairmen of the Lausanne Committee in 1986, and from 2003 to 2011 Ramez was the Honorary President of IFES.

The resurgence of Martyrdom as central to Christian witness

In the early centuries of the Christian era suffering and martyrdom were part and parcel of being a Christian.

The unprecedented recent wave of persecution and attacks on Christians worldwide is forcing Christians to rethink this assumption.  We have much to learn from how the early Christians faced suffering and martyrdom.

The Coptic Church in Egypt traces its roots to the first century. From its inception the Christians in Egypt were a persecuted minority.  From 284 AD onward there was a terrible persecution by the Emperor Diocletian, where it is calculated that many thousands of Egyptian Christians were martyred for their faith.

Most Coptic Christians have been brought up with the stories of the martyrs as part and parcel of their Christian heritage.

On Sunday February 15, 2015 the world was shocked by seeing on TV the video of IS decapitating 21 Egyptian laborers in Libya simply because they were Christians.  This was the first time ever that a martyrdom was filmed.

The incredible tenacity and faith of these men – as they refused to deny their Lord and faced death while praying – had a remarkable impact.

On Monday morning I went to the office depressed by the events of the previous night only to find one of our younger staff members, to my great surprise, acting hopeful and positive.

“I did” she replied,

“And that is why I am so very encouraged, and my faith has really been strengthened”.

When Christianity was endorsed by the State this changed to Christians being – or expecting themselves to be – protected by the State.  The unprecedented recent wave of persecution and attacks on Christians worldwide is forcing Christians to rethink this assumption.  We have much to learn from how the early Christians faced suffering and martyrdom

As I stood with my mouth open in amazement she continued

“All my life I was brought up on stories of the martyrs.  They seemed so remote to my daily life, I really did not believe there was anyone alive today who would be willing to die rather than deny Jesus.  But when I saw these simple young men so bravely accepting martyrdom for the sake of Jesus, all the stories I had been brought up on became real, and I am now much more convinced of my faith in Christ”

In response to this terrible incident, we at the Bible Society of Egypt produced and distributed more than a million and a half copies of a small tract contrasting the row of black-clad members of IS with the row of orange- dressed labourers.

We entitled it Two rows by the sea and included four questions and scripture passages to answer them:

The tract concluded with a poem which went viral on the internet and was translated in dozens of languages worldwide:

Two rows of men walked the shore of the sea,

On a day when the world’s tears would run free,

One a row of assassins, who thought they did right,

The other of innocents, true sons of the light,

The other with hands empty, defenseless and tied,

One row of slits to conceal glaring dead eyes,

The other with living eyes raised to the skies,

The other spread God-given peace and rest.

Who fears the other?

Or the row in black, with minds evil and broken?

Over the past few years there have been several other cases of Egyptian Christians being martyred for their faith.

The acceptance of these martyrdoms by their families and the forgiveness they expressed towards the perpetrators have amazed the nation.

One very popular Muslim talk show host, upon listening in amazement to the wife of one of the martyrs say that she forgives his killer, said:

“Egyptian Christians are made of a different substance… they express this forgiveness out of religious conviction…they are made of steel!”

The Greek word for “martyrdom” in the New Testament is the same word for “witness”.  We in Egypt have once again, after seventeen centuries, learned that martyrdom is the most powerful witness to a watching world.