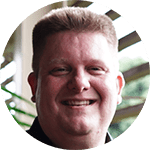 Jonathan has been based in the Philippines with his wife, Jingle, as mission partners with Echoes International for around twenty years. Their ministry involves evangelism, church planting and discipleship with Filipino people.

I was raised in a Christian family and was 12 when the Lord called my parents to missionary service. Seeing other countries and cultures was exciting but school was hard and through many poor choices I found myself in a lot of trouble. To defend myself I took up karate and that dominated much of my life and thinking throughout the teenage years.

We were living in the Cook Islands when the Lord brought along a short-term mission team from Hawaii and I met other believers my own age, who were excited about their faith. As I listened to their testimonies everything I had been raised to believe came together and that night I knelt beside my bed and in genuine repentance and faith (Acts 20:21), cried out to God and begged Him to save me (Luke 18:13). Just as He promised (Romans 10:9), He saved me and put within my heart a great love for His Word (2 Thessalonians 2:10).

The next day I lit a bonfire and burned everything connected to my old life. A deep joy filled my heart as my new life in Christ truly began. For my 18th birthday I received a Thompson Chain Reference Bible which became my most cherished possession (Psalm 119:9-16). In the months that followed, a desire to serve in short term mission grew in my heart. My parents pulled me out of school because the Bible was the only book I wanted to read, and it was decided I would join a short-term mission program in nearby Hawaii while my parents finished their missionary term and then we would all return to the UK together.

So, my missionary journey began with my Bible, one bag of clothes and a guitar with a hole in it. There were no churches supporting me, no prayer letters going out, all I had in my pocket was a couple of hundred dollars and a one-way plane ticket. Looking back today, I smile, and understand far better what the Lord Jesus meant when He said, “repent and do the deeds you did at first” (Revelation 2:5). My God was majestic in holiness, awesome in praises and would work wonders (Exodus 15:11). There was no fear in my heart, just expectation and excitement.

The outreach trip took me to the Philippines, and it was there that I fell in love with the Filipino people and was exposed to absolute poverty for the first time. This trip taught me a lot about myself and the need for further spiritual growth and training. At the end of the year my parents picked me up and we returned to the UK together where I spent the next two years finishing my A-levels and settling into a local assembly in Exeter.

A deep joy filled my heart as my new life in Christ truly began.

The Lord opened up the opportunity for me to teach a Bible Study on Romans out of our house and the elders at Beacon Heath Chapel were supportive and encouraged me as I sought to serve Him there. My love for the Word never waned and Bible School was always on the cards. Then at just the right time the Lord brought a missionary to town and my Father took me to hear him at the assembly in Topsham. He was with New Tribes Mission (NTM) and a new chapter in my life began as I left and trained with them for 4 years completing Bible School, missionary training and Language School. During these years, the Lord kept bringing people from the Philippines across my path, so the way forward was clear.

In 1997 my term of service began just outside Manila learning the national language and culture of the Philippines. During this time, two things became clear: I was not particularly good at the language and there was a cute secretary serving the Lord at a local English-speaking Church. Jingle and I were married in 1998 and returned to the UK to prepare for missionary service together.

My training with NTM was invaluable but it soon became clear we would not be returning with them due to their focus on tribal mission, rather than urban areas. So, we returned to the Philippines with Echoes of Service (now Echoes International) in 2000, and we have been involved with evangelism, church planting and discipleship there for the last twenty years. We could regale you with story after story of how God has protected us, provided for us, and worked powerfully through us but one thing shared with me in Bible School has stayed with me through it all and I want to leave it with you – ‘God’s got a 100% record of faithfulness and He’s not going to spoil it on you!’ (Psalm 89:1)