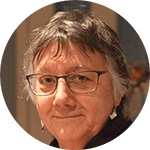 A member of Greenview Church in Glasgow, Liz qualified as a nurse in Glasgow and as a midwife in Aberdeen. She was a mission worker in Pakistan for thirty years, involved in medical work, bible training to children and young people and administration in Christian Hospital. She returned to Scotland in 2011, but has made three return visits, the most recent in Jan to March, 2019.

We all hold them. Ideas and thought patterns that stick in our minds and are perpetrated in our conversation and writing.

We are creatures of habit and often it is easier to go with the flow; to follow the habitual rather than keeping our eyes and ears open for the change and development happening around us.

One misperception regarding Pakistan widely held in the West is that the majority of Christians are bound into the lower economic strata of society; that they are uneducated, held in low paid jobs and unable to pull themselves out of the poverty trap. This stems partly from the historical fact that in the mid 1800s there was a mass turning to Christ among the Chuhra and similar unscheduled caste groups. Western mission workers of the time worked hard and long to teach and mentor these converts from a mainly Hindu background but sheer numbers hindered systematic biblical teaching and training for all.

There is evidence of much lasting and fruitful work across Pakistan, significantly through emphasis on education. Despite this, particularly among areas of low economic income, many of the old Hindu pagan thought processes remain and nominalism is a significant hindrance to the growth of the church. These latter factors enslave people in unhelpful cultural and lifestyle patterns that perpetrate the cycle of poverty.

Without doubt poverty exists. A significant number of Christians still live in slum areas and remain in low paid employment. The cost of living continues to rise and wage increments do not keep pace. However the perception that 80% of Pakistani Christians are still in the sweeper class is no longer true. It is probably fair to say that 80% of sweepers would be Christian, but these no longer form the majority of the Christian population.

It is time for a new awareness to develop…undoubtedly distinct challenges remain, yet the Christian voice is now being heard

It needs now to be acknowledged that from those same slum areas, young Christian men and women are making their way through education. Schools are being set up in areas of low economic standing where both boys and girls receive an education that is enabling some to go on to higher education. In several areas the standard of government education has improved and this may be obtained at minimal cost. Vocational training centres exist with the purpose of enabling women and girls to develop income generating skills they can use in the home. These include tailoring, beautician training and computer skills. In areas where substance abuse is rife, particularly by the family breadwinner, these women have the opportunity and ability to earn for themselves and so keep the family afloat.

It is time for a new awareness to develop. Throughout Pakistan, Christian young men and women are emerging from colleges and universities as doctors, lawyers, engineers, nurses, accountants – the list is endless. It is said that there are now Christians in every profession in Pakistan. They are reaching the mid-range of Government posts. This is making a difference. Undoubtedly distinct challenges remain, yet the Christian voice is now being heard.

Young men and women not only have opportunity to follow a secular profession, they are also able to engage in Bible and discipleship training. Module programs are being developed whereby Christian men and women of all ages can pursue theological and leadership training while continuing in their secular employment and fulfilling their various church and family responsibilities. Ephesians 4:13b is a reality as people attain to “the whole measure of the fullness of Christ”.

Areas of discrimination still exist. People may be sidelined for employment or advancement purely because they hold to the Christian faith and desire to follow Christ faithfully. Children in some cases face unfair treatment at school and may be withheld from taking necessary exams. Some in the majority community would like to perpetrate the idea that Christians are lower class. Despite this, attitudes are beginning to change as the believing Christian community determinedly takes its place in society and causes its voice to be heard.

Media reporting is notoriously fickle. As Christians we need to be aware of the story behind the story. We owe it to our brothers and sisters who face discrimination in whichever country they find themselves, to dig a little deeper, to develop trustworthy partnerships and friendships, to check the sources of information and as much as is possible to try to eliminate bias. As we do this we are enabled to learn at least to some degree, what lies behind a popular presentation, and to pray with wisdom and understanding for the situation as it truly is.

Our challenge is to stand with our Christian brothers and sisters, to pray with and for them, not necessarily that persecution and discrimination should cease, although this is also good, but ultimately that the Name of Christ will be honoured and glorified by the testimony of the Church of Christ in Pakistan and other lands; to pray that our brothers and sisters in Christ may stand firm in their faith, growing in the knowledge of God and into the likeness of Jesus Christ.