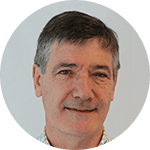 After graduating in medicine from Aberdeen University, Ian with his family, went to serve in Zambia, working on the Angolan border at Chavuma for 11 years  On returning to the UK, he joined the work of Echoes of Service in 1992, and was General Director until 2015. He remains involved on the board of Echoes International and has a burden for travel to teach and train indigenous leaders.

I love reading biographies of all sorts—historical, political, Christian but above all mission. What moves and challenges me are not always the stories of great success, but of those who faced immense difficulties, and formidable circumstances, but did not give up.  They were prepared to carry on making great personal sacrifice to fulfil their vision and calling. But, let us remember that like them we are called to follow a Lord who made the ultimate sacrifice, and if “I have decided to follow Jesus –no turning back”, then at some point, I will be called to count the cost!

What has turned my mind in this direction, and I realise sacrifice is not a major selling point these days among Western Christians, is that I have beside me on my desk a large bundle of letters written by a mission worker who I knew well, admired deeply and who, just a few months ago, finished her life here in this world, while still a relatively young woman.  I am reading her file because I have to give a talk in a few weeks’ time on her life and impact on Angola, Africa.

If we want our lives to count for something much greater than ourselves…then we need to ask ourselves – what level of sacrifice are we willing to make?

As a young woman, Ruth Hadley had a very promising teaching and sporting career ahead of her (she was on the verge of becoming an England hockey international), but God had other plans for her life. Through the African prayer group at university and reading biographies of early African workers, her interest was fired in Africa with a desire to serve God there. Angola was a tough place, with a long civil war still in progress when Ruth arrived there in 1982. Eventually she, and the other mission workers had to evacuate for a few years, but she wrote at the time that ‘the feeling of running away and leaving the Christians to their fate is there.’  Within a few years she returned to the centre of the country, and this time when the war grew worse, despite all advice to leave, stayed on with her brothers and sisters to suffer with them. It was very dangerous, and she explained her reason for staying at that time: ‘We feel the Chokwes need an example of faith in adversity.”

I visited Ruth several times in Angola, and as it wasn’t too far from where I had worked in Zambia, always loved the experience. She was a brilliant linguist, loved football and sport, was one of the best translators I have ever had, a great administrator and wonderful communicator of the Bible – a multi-talented woman indeed! But what struck me most was her deep understanding of African people and their culture, her love for them, and total willingness to pour out her life in their service. She was to me a true example of what it is to be ‘a living sacrifice’ and her life had a huge impact on Africa.

If I want my life to count for something much greater than myself, and perhaps you do too: to really live for something that is worthwhile, to love and serve God, then we need to ask ourselves – what level of sacrifice are we willing to make?  How much of our lives will we give to God – a few hours, a few days, a couple of weeks, or all of it?  Reading Ruth’s story again certainly challenges me?  How about you?